I guess I’ll start with two things that have absolutely nothing to do with my spring break– music. These are two songs that I’ve been hardcore loving for the past month or so:

Now, on to my spring break.

I wasn’t planning on going back to Nashville for spring break. My plan was to just work on school stuff and blog stuff and YouTube stuff over break, but my aunt encouraged me to go back to Nashville and even drove me halfway to make sure it worked out. I was definitely not prepared for the weather when I got back to Nashville, but I managed to not freeze to death. Also, I never miss Nashville’s traffic when I’m away; East Tennessee is such a breath of fresh air when I return from Nashville.

Generally speaking, I spent a total of 24 hours of my break working on a m

odel for my studio class (that’s pretty much an entire day of nothing but stress and yawning). Occasionally over break, my mind would drift, and I would start thinking about a certain someone. Also over break, I went to Wendy’s three times and ate a baconator each time, which I definitely wasn’t supposed to do, considering my health at the moment, but it had been a while since I had a burger, especially a baconator.

Now for the “specifics” of my break.

When I returned to Nashville, I spent my Saturday night watching the Essence Black Women in Hollywood. I was inspired, especially by Danai Gurira. She is such a strong, beautiful woman who absolutely killed (in a good way) her role in Black Panther, but we’ll get to that later. Tiffany Haddish also gave a great speech; it was unrehearsed, hilarious, and from the heart. At the end, Chloe x Halle performed their song “Warrior” from A Wrinkle in Time, but it got cut off, which I was certainly not the happiest about.

My Sunday night was spent watching the Oscars (as I worked on my project). I loved the diversity, but I wasn’t a fan of all the names being butchered. I mean, Matthew McGee– really? I literally yelled at the TV “It’s Matthew McConaughey!” Anyway, when Jordan Peele won an award for Best Original Screenplay, I screamed louder and harder than ever before; he is the first African American screenwriter to receive that award. He made freaking history!! He went from Mad TV to Key & Peele and Keanu to writing and directing Get Out. After he quit writing Get Out twenty times, he powered through and ended up making history; in my eyes, he’s already a legend. I am so happy for him and, honestly, just proud. His success story is so inspiring. Continually, I also loved Andra Day and Common’s performance of “Stand Up for Something” from the movie Marshall. Another performance that I was incredibly happy to see was Keala Settle’s “This is Me” from The Greatest Showman. I love the movie, the song, and her.

Most of the fun stuff I did over break happened over the course of Tuesday and Wednesday when I was with one of the greatest teenagers/ young adults alive– my amazing friend Maria. When she picked me up Tuesday morning, we went to the 21C Museum Hotel and the Frist Museum, two places that I totally recommend going to if you’re ever in Nashville. While walking downtown, I was completely paranoid. I was fearful of the homeless people and getting robbed; Nashville isn’t the way it used to be, and that was in my mind the entire time I walked downtown. Then we chilled at her house for a bit; I worked on my project, and she helped me. We also watched a movie she bought for a quarter called Paper Heart, which was very interesting but definitely not horrible. I also made kind of awkward small talk with her parents. Then.

We went to a special screening of Love, Simon, and OH MY GOODNESS. I went on a rollercoaster of emotions when I watched that movie, and I loved every minute of it. The soundtrack is one of the greatest ever. The plot and script are amazing. The acting is phenomenal. I loved how there were references in the film, and they listed all the references in the credits. I don’t know her name, but the woman who played the play director/drama teacher (not exactly sure which one) was HILARIOUS. It was just a simply beautiful film. If I had to rate it out of ten, I would give it an eight…. thousand.

High school also made a comeback that night. Fun fact: sometimes I am very slow. So when Maria kept repeating the name of a male friend I had in high school (who only talked to me after graduation to see if I would donate to his GoFundMe to help him pay for his tuition), it didn’t register until it was too late. We were at Walmart, and I should have run (or been pushed or dragged or anything) to get away from the conversation to come. That was a conversation I really didn’t want to have. He gave me a hug, and I wasn’t feeling it. He gave me like three high fives, which I also wasn’t feeling, especially since his hands were dry. Then he took my hand and looked at my ring and said his girlfriend had one like it (I didn’t and still don’t care). He literally kept repeating, “Wow, Jamilah. It’s so good to see you” and “I haven’t seen you in a long time.” To make matters worse, my lips, teeth, and tongue were blue thanks to the weirdly tasting blue slushy I had from Sonic. Later that night, I found out that someone I used to talk to (more of an acquaintance than friend) said something about me. She decided to say I wasn’t that smart, that I was just average (fun fact: she was also a valedictorian).
Well, listen here, B (her name starts with a B), I am nowhere near average. I am smart. While working a crappy job at Little Caesars and dealing with personal issues and trying to figure out why I was always unhappy, I managed to focus and study my butt off to maintain a 4.0 GPA for four years. There were several times when I wanted to quit and get out of the dual enrollment classes I was taking but didn’t. Unlike some people I know, I didn’t cheat. I worked my butt off to accomplish what I’ve accomplished and will keep going, and you better be happy you didn’t say it to my face. At the end of the day, I’m not the average one, the fake face who always had crap to say about people I don’t actually know.

Anyway, glad that’s off my chest, when Maria and I eventually got out of bed Wednesday morning, we filmed a very fun video that will be going up on my channel the first week of April. Then.

I FINALLY saw Black Panther, and I LOVE IT. Everyone killed (I repeat, in a good way) their roles. The film starred many well-known actors and actresses: Michael B. Jordan, Lupita Nyong’o, Danai Gurira, Forest Whitaker, Angela Bassett, and Daniel Kaluuya (the main male actor from Get Out), and every single one of them SLAYED. This movie has also (FINALLY) brought more attention to Chadwick Boseman, who has played many great movie roles before; he was Jackie Robinson in 42, James Brown in Get on Up, and Thurgood Marshall in Marshall (which came out last year), just to name a few. One thing I loved were the references to things in black culture, black history, or made viral by black people, such as “What are thooose?” I absolutely loved (and still love) the movie, and I hope nothing horrible happens to anyone in Avengers: Infinity War. That’s all I ask.

Then we decided to do a little bit of thrifting, but before we started, something rare happened: I wanted chicken, and we went to Chick-fil-a, where I ate chicken. I don’t like chicken, but I was having an insane craving for it. Anyway, the first store we went to was Goodwill. I bought a large, red men’s shirt for one dollar, and it is the best dollar I’ve ever spent; it is the comfiest sweater ever. I just have a thing for oversized sweaters. We also went to a place called Buffalo Exchange. I’m 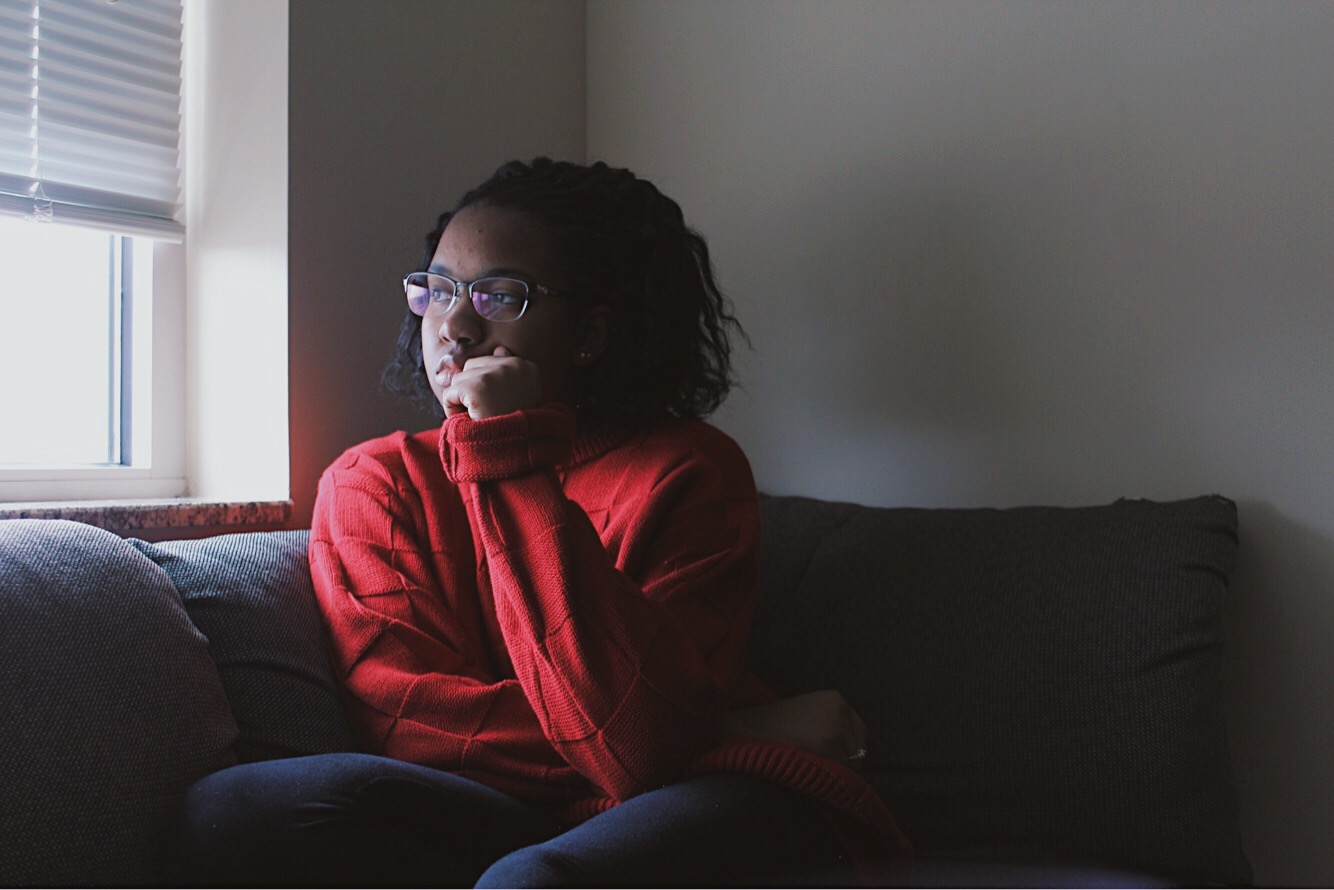 one thousand percent sure I would’ve bought something if I had more time. We got there around 6ish, and they close at 7. If you’re ever in Nashville, I highly recommend going to Buffalo Exchange (just not an hour before they close). When it was time to part, I made the goodbye weird and awkwardly hugged her and yelled “Have a great summer!” (literally HAGS), even though I will most definitely see her this summer. I internally cringe every time I think about it; it was a facepalm-worthy moment.

Most of my Thursday and Friday was spent watching the SEC tournament. By the way, I am so happy Nick Weatherspoon is okay. He plays for the Mississippi State Bulldogs and had a scary injury Friday. I also hope Donta Hall from Alabama’s Crimson Tide men’s basketball team continues to show progress; he also had a scary-looking injury, which ended up being a concussion. Anyway, good news regarding the SEC tournament: Tennessee made it to the finals, and even though we lost (by a mere five points), I could not be any prouder of those guys. Everyone counted Tennessee out, but those guys are proving themselves; I absolutely love it. I know people won’t think lowly of them next year, especially since all of them (minus one) will be returning next season. Go Vols!

Anyway, Thursday morning, I got a copy of my birth certificate, which puts me a step closer to getting my passport– a necessity for going to Rome next year. Thursday night, a discovery was made; my grandmother found my bald spot. Yep, I am eighteen with a bald spot in the front of my head. I think it’s from a combination of having perms for around a decade and having super, super tight braids when my hair wasn’t relaxed. I knew about it, but I didn’t want anyone else to know because I was embarrassed and ashamed. Now, I’m neither of those; stuff happens, and you just have to go with it and embrace it.

Well, I’m back in my dorm now, struggling a little bit. I went from Central time zone to Eastern time zone then had to move my clock forward an hour. Plus, I have to wake up at 6:30 tomorrow morning to make it on time for my 8:15 class. Y’all, I don’t know what’s going to happen, but I’m going to make it. I honestly just want this semester to be over.

My Best Friend Drove 4 Hours to…

A Trip to the ATL