… in our favorite, favorite ship
zooming through the sea
with my family
(to the tune of “Little Einsteins“)
(my cousin and I came up with this)

Currently bubbling with excitement about writing this post because this trip solidified my love for traveling and exploration.

During the final week of June, I went on my first cruise EVER, and I had the time of my life and wanted to document it.

I was not one hundred percent sure what to title this section. To keep it brief, I spent the afternoon of the second day of the cruise simply exploring the boat and had it all figured out by 3:45 pm. Upon initially entering the boat and seeing our room for the first time (because I shared a room with my grandparents), I quickly learned that I had to sleep on a cot on the floor, which posed a small problem that you’ll find out about later.

We were fortunate to go at a time when there was nice weather. Looking out onto the water from the deck was so serene and peaceful. My mind roamed free as I admired the different shades of blue the water held.

Our cruise was a 5-day cruise with two stops: Grand Turk and Amber Cove; both were absolutely beautiful. We spent more time on the beach at Grand Turk and more time shopping at Amber Cove since you had to take a taxi to the nearest beach.

One thing the cruise held was many, many events and activities, and it was hard to choose which ones were worth going to since multiple happened at one time. There were some low key activities, like “Make It with Michaels,” which consisted of decorating blank cards. Then there were some bigger activities, like the gender showdown, which was absolutely hilarious. I also went to an art auction I was invited to but left as soon as I realized how expensive everything was. Another activity I partook in, or at least tried to, was a singles mixer where I could’ve met other singles; however, that activity didn’t happen because the event prior ran over. There was also a love and marriage show on the boat, which was equally as hilarious as the gender showdown; one couple admitted to having sex on a staircase on the cruise. To end the week, I watched a hairy chest competition, which I didn’t think I would enjoy, but I’ll never forget how much fun it was.

When I found out we were going on a cruise, I was so excited about the food I would have the chance to eat; that’s the first place my mind went. However, I got on the cruise, and my excitement kind of died. Everything was a hit or miss, and I definitely missed several times, like with this vegetable lasagna:

It looked so good (the picture doesn’t do its looks justice), but it was disgusting. Also, there weren’t a lot of drink options, so my week consisted of drinking lemonade, bottled water, and a couple of Sprites. We purchased the water and Sprites ahead of time, but they didn’t stay cold because our mini fridge was more storage than a fridge. Though the drink situation and some of the meals were a let down, there were some meals that were really delicious, like:

Oh my goodness. I met some of the nicest human beings to ever exist while being on the cruise. None of the crew staff I talked to were rude. Our steward’s name was Aphisit (he said to call him Sam), and he was so incredibly kind. He made sure to learn all of our names, call us by our names every time he saw us, and pronounced them correctly. Some Americans can’t pronounce my name as well as Sam did. At one of the crafty card making events, I met a woman named Jonna (I probably spelled that all the way wrong), who was from Nashville as well and has a daughter who experienced what I was experiencing, which was being twenty and getting mistaken for a 15-year-old. When we stopped at Amber Cove, we went into a Diamond International store (where I found out there were no taxes or duty fees) and met a sales clerk named Nelson, and he was so incredibly kind. He referred to me as “princess,” which I later found out is because he thought I was fifteen or sixteen. I wish someone had captured the look on his face when he found out I was twenty; it was priceless.

Nothing is ever perfect, even when you’re trying to vacation. For example, I pulled down my bathing suit bottoms to get in the shower, and a ton of sand fell out of them. Yep, I walked around with sand in my butt and didn’t even know it. The bathroom was really small, so I couldn’t take a step without digging butt sand into my foot; I ended up using a washcloth to sweep it up. That incident was minor compared to what happened later that day– my glasses broke. I don’t want to get into the details of how because it was kind of my fault, and it was kind of the other person’s fault (refer to earlier when I said sleeping on the cot on the floor posed a small problem). Just know I spent the second half of the trip walking around blind and staring at everything and everyone because I couldn’t clearly see anything that was more than a foot in front of me. The biggest “woopsie” doesn’t even concern me, but I was there to witness it– someone got left. Guest services kept calling for a man over the intercom. We were supposed to leave Amber Cove at 2:30 pm, and next thing you know, at 3:15 pm, we’re still docked. We hear someone yelling “Hurry up!” A man in a yellow shirt comes running down the port; by the time he gets to the boat, the bridge is already pulled up, and he can’t get on. He rode back to the island on a golf cart. I just hope he had his passport.

The eventful week ended with a day spent at the airport. We got back to Florida about 8 am and got back to the airport a little before 10 am, and our flight didn’t leave until 7:20 pm that night. Our day was spent doing nothing productive in the airport. Then, just when we were about to check our bags, our flight was delayed an hour. Once it came time for us to go to our terminal, I got stuck in the security line for about twenty minutes or so; security found something in a couple’s suitcase, which put everything to a halt. While all of this was going on, I couldn’t see anything but colored blobs. When it came time to fly back, our flight didn’t leave on time, and I ended up sitting next to a man named Mark, who talked the entire time. It was a hectic day, but at least I got this picture out of it:

A lot happened while I was unconnected from the world for a week, but I really enjoyed it. I’m looking forward to the next adventure. 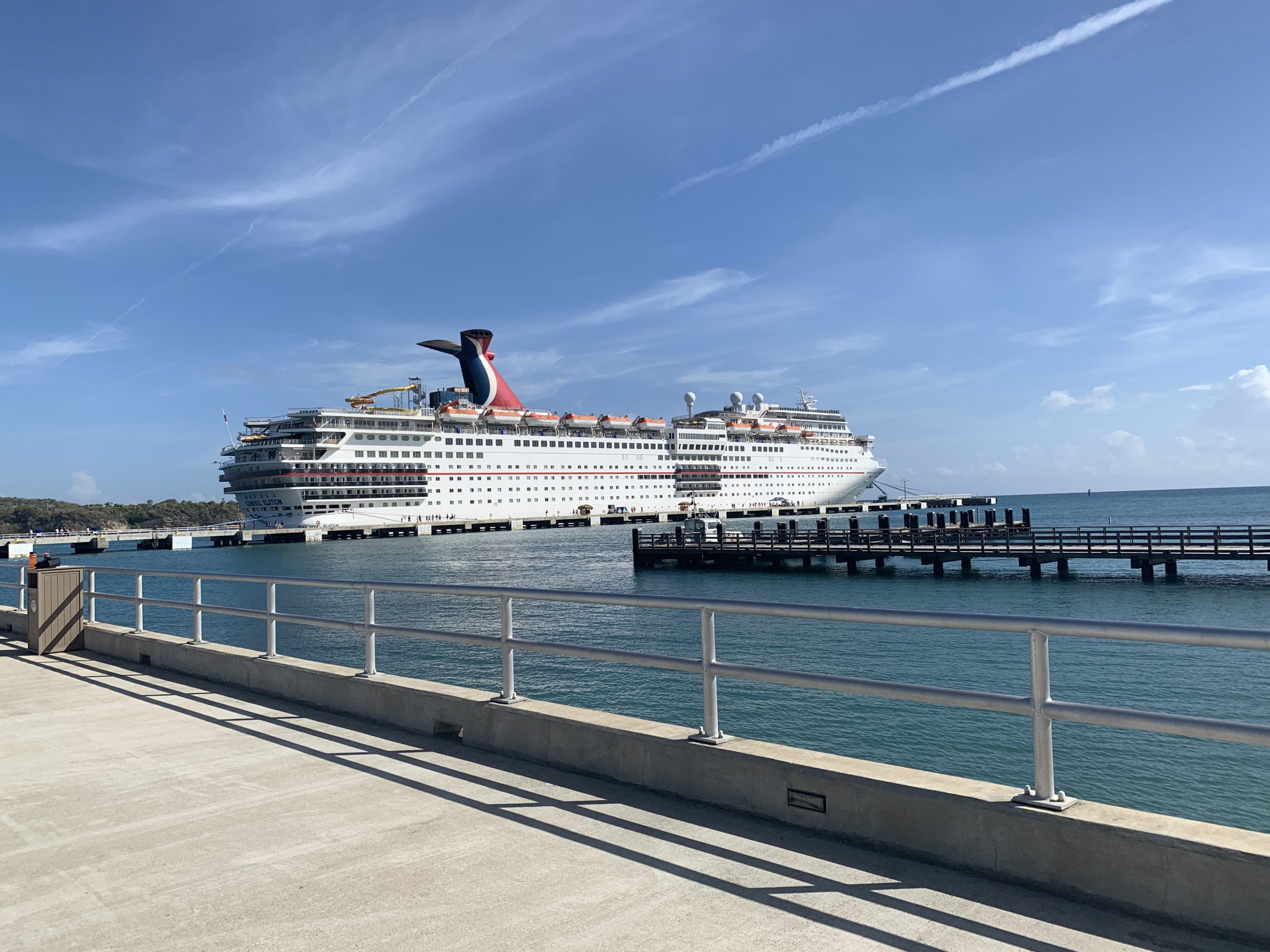