“Clean Up on Aisle Starbucks”

Long time, no blog. It’s been crazy lately, and through all the craziness, I have been itching to blog.

So here we are.

Back on that grind for something I’m genuinely passionate about.

Earlier in the month, I went on fall break (which is just two days for us college kiddos). I spent my first two college fall breaks on campus, being incredibly bored. However, this year I decided to spend my fall break with my friend Rebecca (as mentioned in previous posts) and her mom Amy (whose name I aggressively shouted at the top of a kiddie ride at Dollywood, but we’ll get to that later) in their hometown in East Tennessee.

I’m writing this a week and a half after fall break has ended, so hopefully I remember everything.

Rebecca and I got to her house a little late Friday night and pretty much settled in. I met her mom and her dog; her mom gave me a hug immediately, which A) melted my heart because it was my first time meeting her and B) was one of the best hugs I’ve ever had.

Anyway, from what I can remember, Saturday was primarily spent at a local festival close to Rebecca’s hometown, and I met Rebecca’s lovely grandmother. The festival was fun and gave me a real insight on the local culture. After we dropped Rebecca’s grandmother off at her house, Rebecca and I visited a local restaurant she used to work at, and afterwards, we went “used car phone number hunting.” I’m not sure exactly what you would call it, but we went around to different used cars that were parked on the side of the road and took pictures of the phone numbers. Rebecca and her mom really helped me with finding a used car and helping me understand what to look for in a used car. Rebecca and I also started carving our pumpkins and spontaneously took some pictures downtown in her hometown.

Then I chickened out in talking to my dad about purchasing a used car, but some progress was made.

The entire trip was really fun, but I think this was the funnest day for me. We took a small road trip and explored downtown Knoxville. My favorite part about traveling anywhere is simply exploring. I don’t really care much for doing the standard touristy stuff; I just like walking around and exploring and immersing myself into the local culture. Dozens of pictures were taken throughout the trip, especially on this day. After exploring downtown for a bit, we went to see Pat Summit’s statue because I’ve always wanted to see it. I only stood in front of the statue for a few seconds, but those few seconds were very profound. Leaving University of Tennessee’s campus was a bit of a challenge because there was some sort of event going on. We circled around their fraternity housing two times, which is when a stranger responded to my wave and Chad and Brad made an appearance.

After exploring downtown for a while, shopping ensued. We went to McKay’s, a used bookstore that also sells movies, records, and video games. I bought a couple of fashion/lifestyle books and about five or six movies. Then we went to the mall, where Amy dropped her drink in the middle of the mall (close to a Starbucks) and yelled, “Clean up on aisle Starbucks!” That is a line from this trip I will never forget.

When we got back to Rebecca’s house, we finished carving our pumpkins, where I almost cut my finger off. Because of that, I freaked out and dropped the knife. Then Rebecca’s dog tried to get it, so I quickly snatched it off the ground and accidentally pointed it at her (her being the dog, not Rebecca; it doesn’t make the situation better, but I wanted to clarify). Rebecca managed to carve three pumpkins in the time it took me to carve one.

Our day started kind of late; we didn’t really leave the house until about 1 pm. Amy took off work to hang out with us and join us at Dollywood. Before we went to Dollywood, more shopping ensued. I filmed a haul to show everything I purchased (because I bought over two hundred dollars worth of items, which is a lot for someone who has barely any money; I’m definitely not looking forward to paying that credit card bill), but all the files for the footage are corrupted. In fact, all the video files on my camera are corrupted. I’m a little salty about that and will definitely investigate later.

Anyway, we went to Dollywood after we finished shopping. Amy was able to help me get a discount on my 1-day ticket because eighty-four dollars for four hours at Dollywood made me want to cry. We ended up getting the cost down to fifty-eight dollars (thank you Patty and Amy). After getting in, we walked around the Dolly Parton museum. I’m not really a fan of roller coasters, but I went on a few of the smaller ones. The first ride I went on was a water ride, where I went by myself because water rides are the move, and I was jokingly adopted by the family I rode with.

Then Amy, Rebecca and I went on a swing-type ride. On this ride, I shed tears; don’t ask me why. There is no logical reasoning for why I started crying. After that ride, Rebecca and I went on a few of the kiddie rides. On one ride, I lost my mind, to say the least. I started screaming and shed a couple of tears and even lost a ring (fortunately, it was a cheap ring from Target). On another ride, I didn’t control my mouth around the little kids and aggressively shouted Amy’s name. On the final ride, the (nasty, saltless) popcorn I ate almost made a reappearance.

This was the last day of fall break; it was pretty much a work day for everyone. Amy is a high school teacher, and she went back to work. I had a massive allergy attack and worked on my project the best I could; Rebecca also worked on homework and finished some housekeeping things. Before leaving town, Rebecca and I stopped by the restaurant she used to work at to get some chili dogs.

Thank you to Amy and Rebecca for having me for fall break. Amy is one of the coolest parents I’ve ever met, and she’s just overall a genuinely good person/parent with a good heart; it was hard saying goodbye.

Throughout the weekend, I learned a lot about myself and about Rebecca’s life and about people I’ve never met. I always have a big realization/learn something new when I take a trip. Stay tuned for the next blog post about what I learned/realized during this trip. 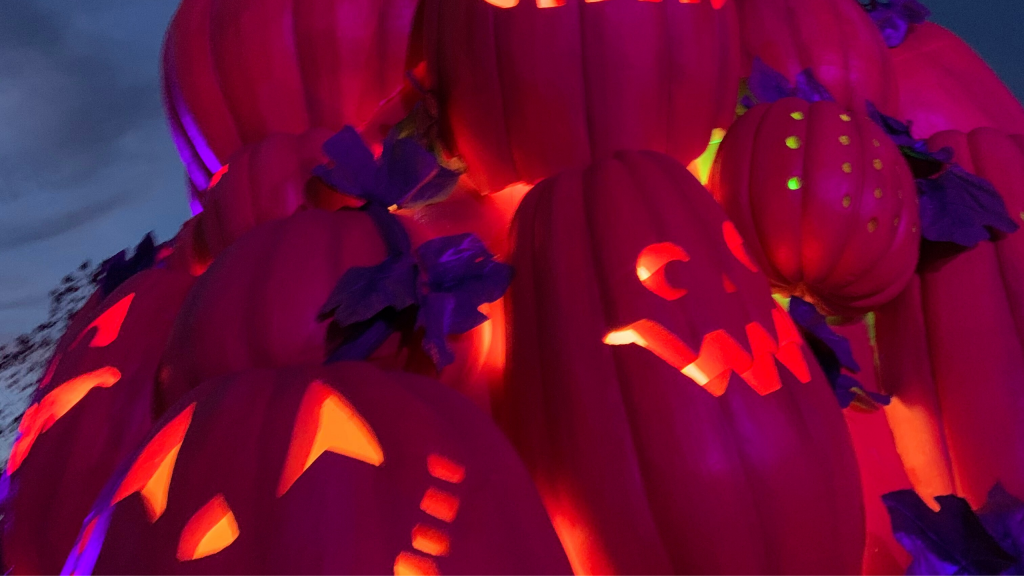