I Caved & Watched Bridgerton: A Review

Twenty twenty, one of the worst years of the 21st century (thus far), ended with the beautiful distraction that is Bridgerton. Since it came out on Christmas Day, Bridgerton has been all the rage, which has led to it already being renewed for a season 2– a season they’ve already found the leading lady for (hi Simone Ashley). Word on the street is Netflix is ordering eight seasons of the record-breaking Shondaland show. You may be wondering, “How is that possible?” Well, in case you haven’t heard, Bridgerton is based off the 8-novel series by Julia Quinn.

Because I have the urge to never get into the trendy ways of society (hence why I have yet to download Tik Tok), I told myself I wouldn’t watch Bridgerton. However, when I caught sight of the Duke of Hastings, I had to watch it immediately and ended up binging the entire show in two days; work kind of got in the way of completing it in one day.

Yeah, you could say I ended up really liking the show and will probably be one of the first ones to binge season two as soon as it’s released; I’ll be done with college by then, so I’ll have the time.

To review the show and express my undying love, as well as slight disappointments, I found it would be easier to break everything down into sections.

As soon as I started the first episode and saw that it was executively produced by Shonda Rhimes, I knew it was going to be a good show.

Then my excitement for the show amplified when I heard the voice of the iconic Julie Andrews as the narrator, aka Lady Whistledown. Her character has the same essence as Gossip Girl, which doesn’t really matter to me. I just have an undying love for Julie Andrews and could listen to her speak for the rest of my life.

One of my favorite things about the entire show is the music, which is just one way the show modernizes the nineteenth century English society; I have a fond appreciation for shows that modernize history (looking at you Hamilton). Anyway, if you’re really paying attention, you can here the classical instrumental version of current pop songs, such as “Girls Like You” by Maroon 5 in the first episode or “Wildest Dreams” by Taylor Swift at the beginning of episode six during the sex montage.

The Disappointment that is Daphne

This is where my opinion may become controversial, and though you haven’t read it yet, I said what I said.

Daphne is definitely my least favorite Bridgerton character, which is kind of sad because season one is her love story since she is the eldest Bridgerton daughter. However, I personally don’t vibe well with Daphne and find her to be very annoying and selfish. Like, her love with Simon is great, but it’s great because of Simon. I don’t see any real character development with Daphne until the final episode of the season.

I spent the entire season wanting to give Eloise a hug. Her wants and needs seem to be overlooked by the entire family, making her feel invisible and unheard. When I think about it, part of the reason I don’t like Daphne is because of the way she treated Eloise. It was a very accurate portrayal of any sisterhood, but I still felt like Eloise’s desires were overlooked and dismissed. I related a bit too much to this aspect of Eloise, which is why I really want to give her a hug.

Since I will probably never get around to reading all eight of the Julia Quinn novels, I can’t wait to see what happens with Eloise and the relationship she has with her family. Eloise deserves some goodness.

Everyone’s Husband: The Duke of Hastings

Simon Basset, The Duke of Hastings is an absolute looker. Like, where did he come from? He’s such a cutie and played a major factor in the show blowing up the way it did. As the show progresses, you can’t help but fall more in love with the Duke. The way I got flustered watching him in this show… I’ve never experienced it before.

The show ended on a happy note for the Duke and Duchess. At the end of the day, the best character and character development goes to Simon Basset, The Duke of Hastings, and I am looking forward to (hopefully) getting glimpses of him in future seasons.

Is Bridgerton worth the hype? Hell yeah. As more seasons are filmed and released, I hope the hype continues and the entire team behind Bridgerton don’t disappoint.

Speaking of disappoint, can we talk about the Golden Globes snub for a second? Bridgerton didn’t get one nomination, but Emily in Paris managed to get one? I love Lilly Collins; she’s a beautiful woman with a beautiful soul. However, out of all the Netflix originals, Emily in Paris is the least qualified for any award nomination. Maybe a teens choice award, and that’s it. Bridgerton being the record-breaking show that it is without receiving the recognition it deserves (minus everyone thirsting on social media) is the exact reason I, a used-to-be awards show junkie, stopped watching all awards shows.

If you’re on the fence about caving and watching Bridgerton, I’m here to give you the push you need. Watch it. It’s definitely worth it. 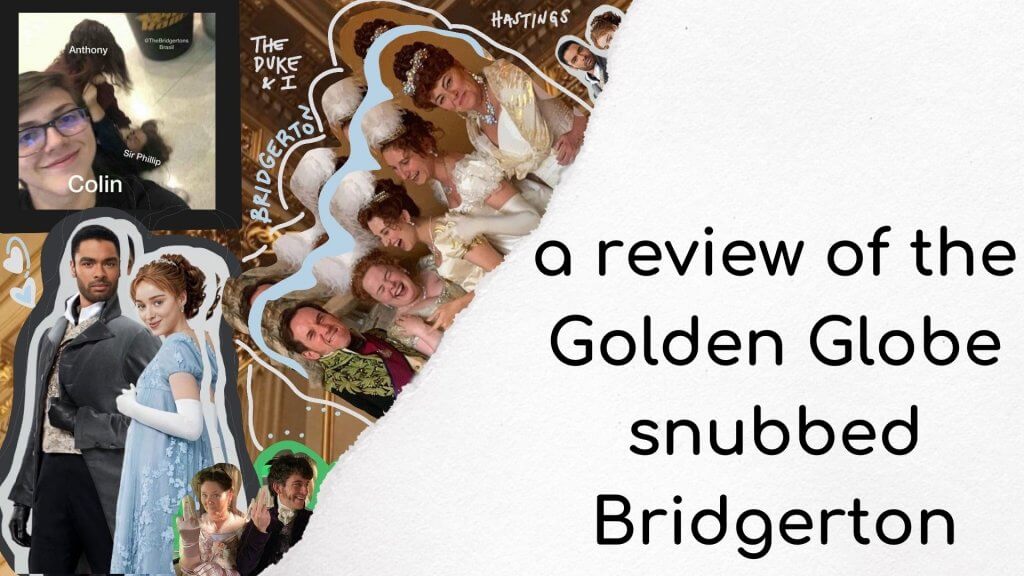