David Has My Entire Heart

“I will never live in the same state as Normal, nor do I necessarily want to.”

David Drucker and Kit Lowell are from opposite ends of the high school popularity spectrum. After a horrible incident leads Kit to sitting at David’s lunch table, both of their lives are changed; is the change for better or for worse?

For starters, Julie Buxbaum’s description of the characters makes it so easy to visualize them. David reminds me of a younger, more attractive version of Sheldon (Jim Parsons) from The Big Bang Theory. I envision Kit as the daughter of Schmidt (Max Greenfield) and Cece (Hannah Simone) from New Girl. Having an easy imagery of the main characters enticed me to read it more and more, and I finished the book quicker than I anticipated.

The book starts with the philosophy that names don’t belong to people they’re given to, and it instantly reminds me of a John Green book, which I think is a tone most young adult books from the later 2010s possess.

As for the writing, I liked the alternating narrations between Kit and David. As someone who has no idea how the male mind operates, I always enjoy reading a male point of view.

Speaking of the male point of view, the best thing about the book is David Drucker. Even though he’s not a real person, he deserves the world. I appreciate Julie Buxbaum for creating hot, nerdy, confident, self-aware male romantic leads.

David’s perspective comes in the odd number chapters, and while I was reading his chapters, I couldn’t help but have intense feelings for him, especially chapters 17, 19, and 21. Those chapters ripped my heart out of my chest, and there were actual tears coming out of my eyes; for a moment, I thought it was another All the Bright Places.

When he says things like “Imagine us as a ragtag group of do-gooders on the side of the underdog and the wronged” and “I need instructions for dancing. Like how do I move my body to music in front of other people? Break it down. Step by step,” my heart melts for David Drucker. Having a character like David who doesn’t “self-sensor” is encouragement to do the same, which would lead to a life of pure authenticity– something I’m trying to achieve.

Okay. Brief David obsession is over.

There are flashbacks throughout the book, and I wish they were more obviously distinct from present conversations and actions. It all tends to blend together. I definitely would love to see this become a movie; turning the book into a movie would help visualize the flashbacks easier.

Also, I know I’ve obsessed over David (because he deserves the best parts of the world), but Kit also isn’t that bad. Although, I will say Kit keeping a secret from David then getting mad at him for figuring it out really upset me; after that moment, my dislike for Kit rises a bit. David shouldn’t have to harbor all the blame and guilt because he didn’t respond in the best way. I just wish the way Kit handled the situation and treated David afterwards was a little bit different, and I think it would’ve made for a slightly better ending.

Long story short, What to Say Next is adorable but in a super nerdy way I both love and am interestingly inspired by. Without warning, this book is filled with so many tear-worthy moments; it hits right in the feels.

The title and the synopsis make you think one thing, but the book goes in a completely different direction. It’s full of plot twists that take you on an emotional roller coaster. Julie Buxbaum beautifully crafted a heart-wrenching young adult romance.

Next book to be read and reviewed: We Were Liars by E. Lockhart

“We just assume other people understand what we are talking about. That we are, as the idiom goes, on the same wavelength. In my experience, we are not.” 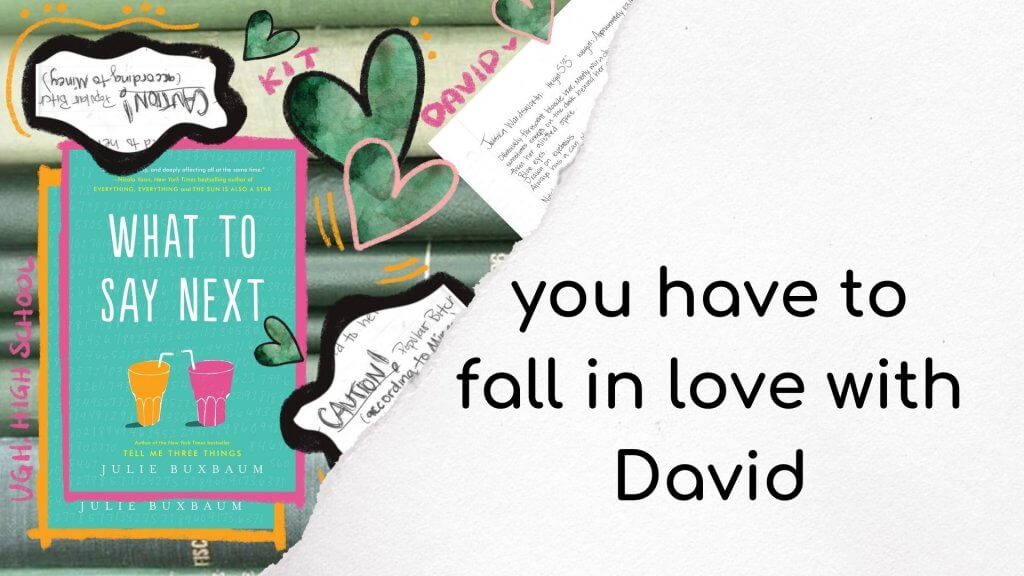