Still, I’m happy he’s in my life with his beautiful music. I find it so heartwarming that there’s someone else out there who has never been in a relationship and manages to write love songs. It’s so brutally relatable, except I write short love stories instead of love songs.

When it comes to being a hopeless romantic, Conan Gray takes the cake, and I love it. Therefore, I had to see him in concert.

Before we get into my actual concert experience, I want to go over the outfit real quick.

For Conan, I wanted to keep things simple but still dressy and slightly interesting. My pants are from Conspicuous Boutique, a local Black-owned business; they are so incredibly comfortable. The blazer is a hand-me-down from a church member, and the super cropped shirt underneath is from Forever 21 from forever ago. I kept the jewelry super simple with my staple silver rings, which did not match the metal of my necklace, but I had to wear the necklace; it was a part of a special “Will you be my bridesmaid?” gift that I got (which I’m still shook about). There is not an ounce of makeup on my face, and honestly, that is partly because I kept blinking my contacts out.

Now for the actual concert (because it was truly an experience–one of the best emotional roller coasters I’ve been on).

The show started at 8 pm, but the doors to the auditorium wouldn’t open until 7 pm, which meant I stood outside for almost an hour since I got there about 6:15-ish.

There were three high school juniors standing in front of me (I know they were high school juniors because they very loudly talked about it), and they were being decently stereotypical. They were saying things like “If you’re at a Conan Gray concert, you’re gay” and “Everyone here looks a little fruity.” The heterosexual couple behind me and I were incredibly uncomfortable.

Once I got inside and got to my seat, I quickly realized I was sitting next to a kind of unpleasant yeller who vaped during the show, especially the opening act. I don’t care if you vape, but not around other people in a historic building and blowing it everywhere; you never know if someone has breathing problems.

When I went to check out the merch before the show, I immediately decided against buying some because the line was a ridiculous joke–way too long for my liking, and my feet were already killing me from standing on the concrete outside. Though, part of me wishes I would have toughed it out for a really cute tote that said “Café Gray” from his “People Watching” music video.

One thing I did love about the entire experience was the intimacy of the auditorium and the kindness of the security team. The greeters were more clear with their directions to seats (compared to a larger arena’s staff), and despite sitting next to a wall in the corner under a balcony, I had a decent view of the stage. The only sucky thing about my seat is I missed the opening song and all of the videos and visuals.

Knowing I’m not the biggest stan in the world (but I’m also nowhere near a fake fan), I was okay with my seat. At the end of the day, I still got to see Conan, and I still had a wonderful time belting lyrics to some of my favorite heartbreak/hopeless romantic songs.

I genuinely love Cone; he is the sweetest human to exist and is still the same genuine, authentic human as he was when he was on YouTube.

The Setlist (at least, for Nashville): 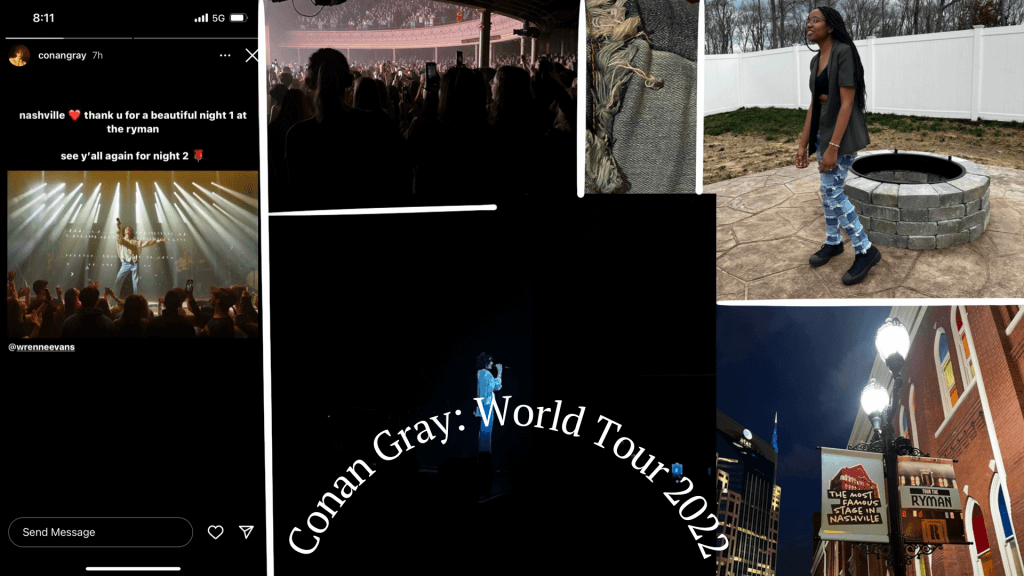