The Rule of Three

An article by Cristian Raiber for Modula says, “The rule of thirds helps capture the subject of a photo in a way that’s pleasing to look at…” The rule of thirds was originally used for painting but can be used in all different mediums, including photography, interior design, fashion design, etc. Of course, the process is different for each form of artistic expression.

This specific writing is about using the rule of thirds in decorating your space, in creating little moments around your physical home that speaks to the truth of who you are.

Three pieces of memorabilia and décor draws attention to bigger moments in a space, and if done correctly, can be pleasing to the eye. You want to take into account the height, color, and texture of everything you choose for your group of three, so there’s some coordination.

Using the décor in my apartment, I wanted to share good and bad examples of the rule of three, which is what I like to call the rule of thirds.

These two marble table areas are my proudest rule of three moments. In the right picture, the colors coordinate very well, especially with the greens being similar. Both images show instances of 2 out of 3 items having the same height; though the orientation is different, it works. There’s not much around these areas to distract the viewer from the beauty of the fake and real plants.

You stick with utilizing three items because sometimes four items can be too much, too overwhelming, chaotic, or overstimulating. Due to limited spacing for some functional items, these two areas have four items that don’t work together. The fruit bowl in the left picture is too wide compared to the items around it, and the bottle of stress relief lotion is too tall for the items around it. In similar situations, having two items or one can be random, confusing, or underwhelming.

You don’t want to overcrowd a space with your three items, so it’s very important to take sizing into account when deciding the items you choose and where to put them. Though both areas follow the gist of the rule of three, the orientation and sizing of the items makes these two areas a little displeasing to the eye. It’s like you can’t help but look at them and think something is off.

I loved learning about the rule of thirds in both my geometry & interior design fundamentals classes, which is proof that everything is connected. It’s crazy to think three, an odd number, provides the most balance when decorating & personalizing a space. 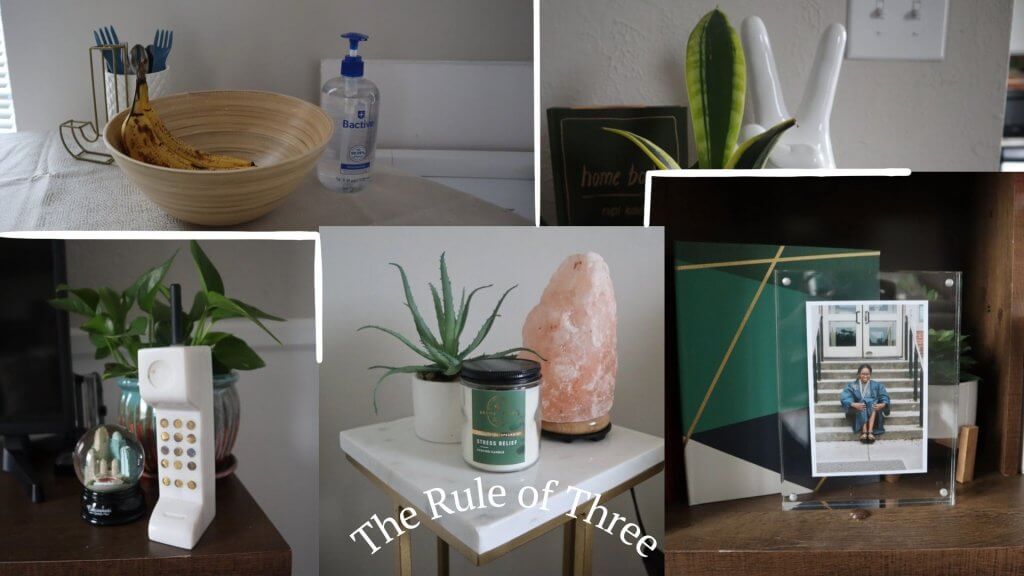