Not too long ago, a close friend and I had a conversation that I will never forget. We picked an artist that reigned supreme for us, that we always found ourselves turning to when we felt we had nobody else, that we can look past the transgressions of because the music is just too powerful.

My artist is AJR, even though they’re technically a band.

I initially discovered AJR when I fell down a YouTube rabbit hole and found myself watching the music video for “I’m Ready.” When I watched it, it had less than ten thousand views, and I remember hating it because the voice of SpongeBob was included; I’ve never been a fan of SpongeBob.

I looked beyond the SpongeBob voice and focused on the lyrics, which is when I fell in love.

When I discovered that music video, I was on the cusp of sixteen and balancing all that comes with trying to survive high school–good grades, multiple clubs, confusing friends, and boys. The lyrics “Break me down, dirty jokes // Watch me dear, and say what you wanna know // Beauty lies, within the eyes // Of the beholder, I’ll be holding you close all night” perfectly described a situationship I was in at the time–sadly, the closest thing I’ve gotten to a real relationship.

Simultaneously, I was entering a dark place in my mind, and the upbeat, dance-y production of the song aided in pulling me towards the light. Of course, one song wasn’t going to cure all.

For the first time, I found a song that perfectly depicted a moment in my life–how I was feeling–and was able to get my hips moving.

Since then, they have continued to release song after song, album after album, that perfectly depicted a pivotal moment in my life.

One of my favorite lyrics from “The World is a Marble Heart” is “The world is a marble heart // It’s bullshit and we know it”. This song became overplayed by me when I started leaving my childlike stupor and started looking at the world through my own eyes. “Big Idea” is the most played song by me from that album, which still reigns true to this day. “Now you’re on top of the world tonight // You can do anything you like // And through that struggle we made a star // You can do anything you want”. At the time, this was my song of inspiration and motivation and hope that I was meant to be something beyond my tumultuous teenage years.

This album came out right when I graduated from high school, when I was about to turn eighteen and never return to the toxic environment I was becoming numb to. I consistently listened to the lyric “Can we skip to the good part?” because I felt stuck and was so incredibly ready to run away and leave.

Everything about “Turning Out” struck a chord with soon-to-be eighteen Jamilah. I remember crying to this song when I initially heard it because it gave me so much hope that what I’ve endured was preparation for a life that’s going to be better [and it is!]. Considering my dad wasn’t really in my life, and I looked to him to rescue me from the hell that was my teenage home, hearing “And now after it all, I just really wanna call // My dad, my dad…” absolutely broke me. It’s all I ever wanted, but I felt too scared, abandoned, and isolated to do so.

Even though Neotheater came one year before the world shut down, I survived lockdown number one because of this album. In the opening track, hearing “I wanna be next up forever // Find a way to never hit my peak” was a reminder that the only person who can beat me is me, and I needed to take the time the lockdown provided to figure out how to better myself. “Wow, I’m Not Crazy” will forever and always be a validating song for me; no matter what anyone says, I am indeed not crazy.

This album came right when I made a big decision with adulting and thought moving into an apartment with someone I hardly knew was a good choice; I survived that messed up toxic environment because of this album.

First off, I’ve had my own “Joe” and still do. Everything about “3 O’Clock Things” is why it’ll be one of my favorite AJR songs of all time. “Would you go running if you saw the real me? // Maybe you’d love ’em // Yeah, maybe you’d feel me // But I’ll never ask you, no that’s super scary” was my inner monologue as I battled my desire for close bonds and tortured myself with loneliness last year. I am “Humpty Dumpty”, but I’m also “Way Less Sad”; both songs describe this moment of simultaneous hidden sadness and blissful contentment I’ve found myself in.

Considering I don’t think I would be alive without the massive aid of AJR, unbeknownst to them, I found it imperative I fly across the country to see them on my birthday. I wanted to celebrate my existence with them because they’ve played a part in me being here. Every album is on time with an important moment in my life, and I could not be more grateful.

Here’s to more necessary life moments, both good and bad, and surviving with the aid of three brothers who started writing banger after banger in their New York apartment! 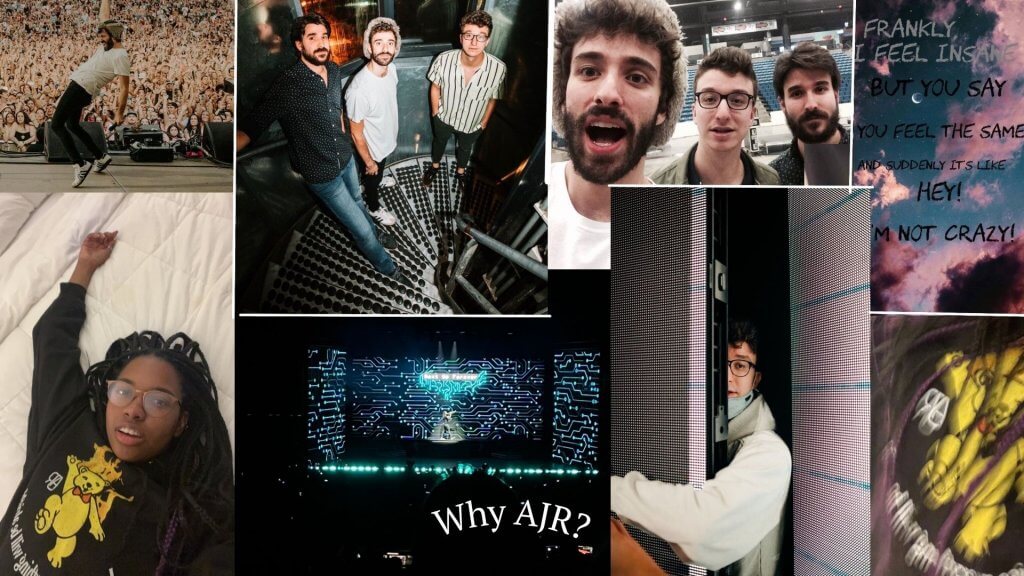