When I’m writing this, it’s July 30th, and I’m sitting by a canal in downtown Indianapolis, Indiana and watching the sunset. There’s not much to say or write about my first time in Indiana, but here are all the pictures I’ve taken:

Anyway, as I’m sitting by the canal by my lonesome, I’ve been thinking. Besides the fear of ticks as I sit on this park bench, one thought, consisting of two words, runs through my mind: I’m done.

I’m done putting my happiness on hold to make other people happy.

A woman saw me writing this down in my journal and asked if I was journaling. She then said, “It’s good to write down your thoughts. You never know what it may lead to.” I think I handled that conversation in a non-awkward way. Now there’s a guy walking to the park with a gaming/gamer headset on.

For a large portion of my life, most of what I said or did was to make sure other people were happy. While I said or did those things, however, I was truly unhappy. I felt like I was losing myself.

Then it came time for college, where I started finding myself again and really coming into who I am and who I know I’m meant to be.

Still, as I sit here and reflect on my 2019 so far, I’ve realized I’ve slipped a little. So far, twenty nineteen has been an incredible year. However, now that I’m truly sitting down and thinking about it, I started sacrificing my happiness again. I think it started somewhere in the beginning of the second semester when, right off the bat (I think that’s expression), I wore my self down trying to put other people’s happiness before mine.

I didn’t talk to my long distance friend as much, which hurt. I didn’t talk to most of my family nearly enough, which really hurt. I did and said things for the sake of other people, but to this day, as I’m writing this, I still feel guilty about the things I said and did.

While I’m in Indiana, I’ve made plans with people for when I get back to college, and I’m already unhappy with the plans I’ve made, even though nothing has happened yet.

Maybe that’s what sparked this stream of thoughts about how I’ve sacrificed my happiness for others and how many times I’ve put my happiness to the side.

I was doing good and then started messing up. When I sacrifice my happiness, I lose my self, and I don’t want to lose Jamilah because she’s freaking amazing.

I can’t keep putting my happiness and morals and values on the sidelines for the sake of other people. It’s not healthy, and part of me feels like it could eventually kill my overly emotional self.

With every small road trip I go on, I learn a little bit more about myself and who I’m becoming. This time around, I figured out who I’m losing, and I don’t want to lose her.

August 11th Jamilah here, and I scrolled through Instagram the day after I wrote everything above in my journal. I saw this on @girlsbuildingempires Instagram, and I thought it went perfect with this post:

PrevPreviousEverything Option B Has Taught Me
NextAugust 9thNext 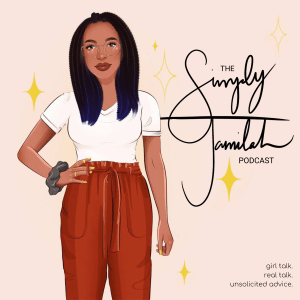 Sign up for a weekly party for your inbox, filled with so much more Simply Jamilah fun!