*This is a book review of Tell Me Three Things by Julie Buxbaum.

Another case of don’t judge a book by its cover. Every time I walked into a Books-A-Million and roamed the predictable teen romance section, I always saw this one but never picked it up because of the heart-shaped waffles on the cover.

Then desperate times called for desperate measures, and I needed a book to read. After talking myself into it, I bought this book, and now I wish I had never judged it. This book is absolutely beautiful.

While reading this book and/or its summary, one would assume the book is strictly a teen romance, but it’s much more than that. It’s a mixture of dealing with loss, struggling with change, and the beauty of a first love. Also, there is a very strong theme of trying to fit in and conforming to a new society, which often causes some frustration with Jessie, the main character.

Throughout the book, there are so many moments that make your brain go “Woahhh.” Yes, it is aimed at a pre-teen and teenager demographic, but there are some things that can be applied to those who are older. Like, on page 77 when she says, “I am not alone. Not really. Just geographically isolated.” Having read this book during a worldwide COVID-19 pandemic, I had an ah-ha moment; I am geographically isolated from my friends, not alone, even when it feels like it.

The book immediately jumps into the plot; there’s no slow start, which I appreciate. Some books drag out the introduction, and it doesn’t make the book fun to read. In Tell Me Three Things, the wittiness hits you on page 2, where you’ll instantly fall in love with SN; in my head, I pictured him as my dream guy after reading page 2.

The first sexual innuendos hit on page 6 in a clever, non-cringe way. What would a contemporary romance book be without mentioning sex at least once? Sex is sparingly discussed throughout the book but not in an overly graphic way. In fact, the terms “half peen” and “full peen” are used to explain any sort of sexual action; you’ll have to read the book to understand.

On page 108, the title comes into play when Jessie says (more like types because her and SN only communicate digitally since SN is anonymous) “Tell me three things I don’t know about you.” After reading that and seeing how that plays into the plot for the rest of the book, I decided to start using that point of conversation for any future date I go on.

Throughout the book, Jessie is being bullied by Gem, who is petty in a very annoying way. Jessie is already dealing with a lot, which affects her mentally, and the bullying does not do anything to help her mentality. This is made especially evident on page 208 when Jessie says, “Gem, on the other hand, sees me through clear eyes,” after Gem calls her a “whore” and a “slut” and other horrible names for no valid reason. Don’t be a bully.

As the plot thickens, more characters are introduced. Soon, I couldn’t figure out whether to root for Theo, Rachel, or Agnes; Liam seemed a little dense. The relationship between Jessie and her father is frustrating so they were out of the running. I ultimately ended up rooting for SN who, in true teen romance novel fashion, you don’t find out until the end.

Also, random note I just have to share: There are moments where people say “Hey Jessie” like on page 91, and I think of the theme song for the Disney show every time I read it. If you don’t know what I’m talking about:

Another random note: On page 149 when she says “His tone is borderline belligerent,” I couldn’t help but think of the Tik Tok with the dog owner telling his dog “You actin’ belligerent.” If you don’t know what I’m talking about:

Though it seems like SN is a main character, I believe the story is truly about Jessie and dealing with change. Though I found myself getting frustrated with some of Jessie’s actions and thoughts, I still thoroughly enjoyed the book and will read it again. Julie Buxbaum did a beautiful job crafting this book; it has the same deep level thinking and intricate plot as a John Green book.

Next book to be read and reviewed: The Last Black Unicorn by Tiffany Haddish 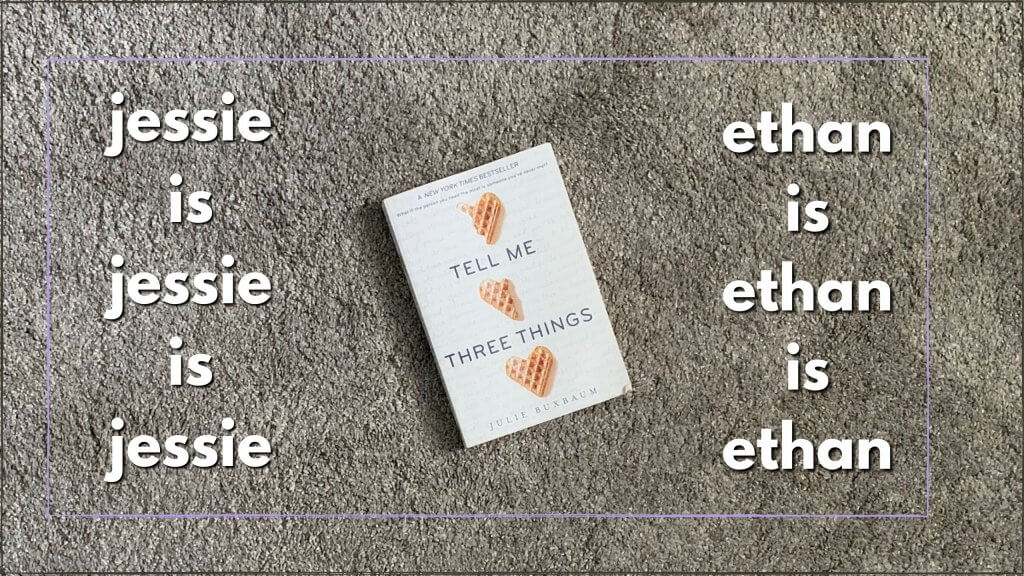