At the beginning of November, I took another solo trip, but it was a bit more spontaneous than my trip to California. I left town on November 4th and returned on November 6th.

However, just like with my California trip, I made a lil’ video to document the whole thing–the wandering around town I did.

I left work at 1 pm to hit the road for almost five hours and delivered the “shocking” news about getting a job out of state to my family, people who didn’t know (and probably still don’t know) I was leaving town for the weekend.

Can I just say, the infrastructure and roads are absolutely awful in Cincinnati. I’m sure the potholes would’ve destroyed my car if it wasn’t wasting space at Maaco as they didn’t complete their promises of working on my car. I was happy to still be in the rental, even though I didn’t know I would be paying for it (shout out to my insurance).

A year-long desire for queso from Frida 602 motivated this trip, and after consistently putting it off, I finally decided to stop waiting for someone and left town.

As soon as I entered the Covington-Cincinnati area, I immediately went to Frida 602, which was kind of a mess. The first time I went, I was with my friend, and we didn’t have a problem finding parking. This go around, I struggled with finding parking and lost my car in the parking garage. Turns out, I’m not the best at operating in the dark in foreign places.

Once I got to the restaurant, I had a good time with myself. I indulged in and conquered my queso craving (I can make it another few years now). I also had a very intense and divine Frida margarita, which was unforgettable. Plus, because I felt pressured to eat more than the queso, I ordered the beef burrito bowl, which tasted like what the barbacoa bowl from Chipotle wants to be (trust me, I tried to recreate it).

After filling my stomach with Frida food, I ended my first night in Cincinnati Facetiming my sister-friend to share my news and do an apartment tour of my studio Airbnb–the slightly scarily quiet Airbnb with no TV. I brought my iPad to try to make up for the lack of a TV, but it was kind of a fail.

My one full day in Cincinnati was spent wandering around while the clouds threatened a torrential downpour but did the uncomfortable sprinkling thing instead.

I walked around an unfamiliar part of downtown with a goal of finding Mica 12/V, which ended up being incredibly overpriced; I could not bring myself to overpay for a cheaply made magnet of David from Schitt’s Creek. While looking for the store, I stumbled upon a pride market in a park and admired different works of art on the sides of buildings.

After people watching for a long period of time, I made my way towards the Cincinnati Art Museum, which I didn’t realize I had been to before until I walked inside and made intense eye contact with the woman at the front desk.

On a quest for peace only sitting among trees can provide, I went to the Khron Conservatory. I really wanted to walk around an actual park (aside from the pride market), but the weather and wind advisory were not on my side. Despite being inside to chill with the trees, I found the peace and solitude I needed.

At the conservatory, I realized I hadn’t eaten much on the trip, so I went to El Barril for linner. El Barril is a very legit Mexican sports bar and grill where I had a delicious burger.

Then I decided I wanted water and ish hit the fan. There were tears.

The closest, non-sketchy spot to me was Target. Well, that Target was an out-of-my-league boujee Target located on a college campus. Parking did not exist unless you had a student pass, and the frutstration of the half hour I spent driving in ridiculous weather on a confusing campus opened the floodgates a little.

I ended up at a suburban Target for my water, where I kept running into a woman in an electric wheelchair who gave me a speech about cutting my hair and never using perms… I think she thought my dreads were real. She literally said to let my faux locs grow nine feet so I can let a man hold my hair while I walked around…

To end the night, I took a very necessary and very long bath before eating gelato and putting on my favorite foot mask from Target (I deserved that foot mask after the college campus fiasco). I also finally watched I Love My Dad, a movie I’ve been wanting to see since it won SXSW.

Though nothing about the trip went as planned (because I didn’t have one), it still felt nice to force myself out of my head and away from stress. As I stated in my podcast episode about this trip, it showed me I have to force myself to take care of myself until it comes naturally. 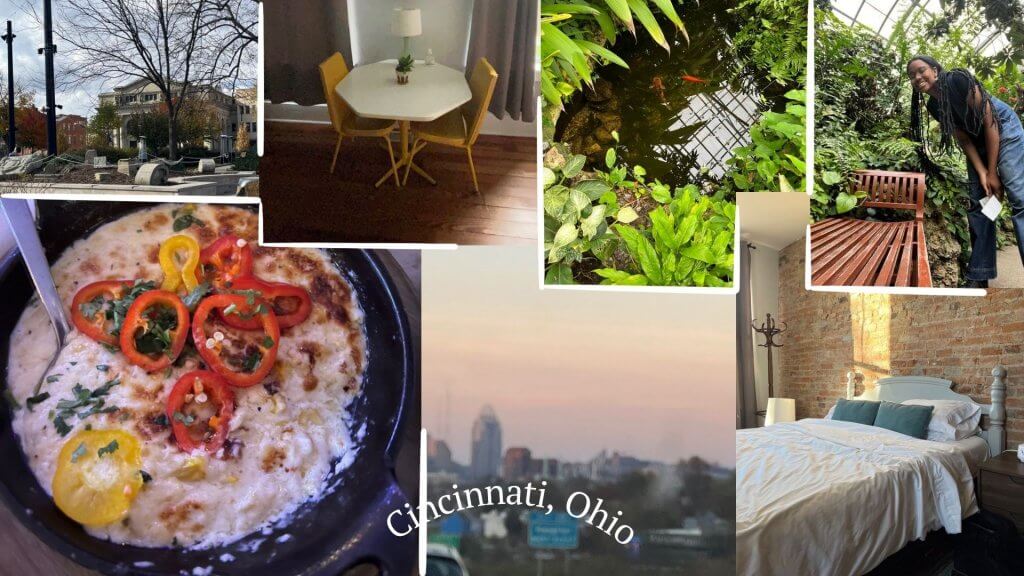