They Cut My Teeth Out

This is the journey of getting my wisdom teeth cut out.

First and foremost, I want to shout out my phenomenal aunt and uncle for helping me out; I literally couldn’t ask for a better duo… even though my aunt couldn’t stop laughing at me being a mumbling mess (the last clip is something I apparently filmed on my own phone while I was drugged; I literally have no recollection of filming this):

The night before the surgery, I ate brocolli and cheddar soup. I was hoping for something a lot more fulfilling since I couldn’t eat six hours before my 9:30 am surgery.

When it came time for the surgery, the preparer lady (I don’t know her official title and am honestly a little too lazy to google it), was incredibly nice. After telling her about my first experience with IV (where my reaction to a needle going into my skin is violence; yes, tattoos are different), she gave me a ball to squeeze. It kept my inner crazy inside.

The wonderful woman couldn’t find a vein in my right arm, which was my greatest fear unlocked. I need to learn how to find my own vein to ease the stress of future operations. After completing the IV portion, the nurse tied my arm to the chair, which was more than a little alarming. Turning on the oxygen tubes also spooked me; I about jumped out the chair.

All I remember before waking up in my aunt’s guest room is the surgeon saying, “Okay, now you’re going to feel a warm liquid go up your arm.”

When I came to, Jessie Reyez was playing on an unfamiliar-looking bluetooth speaker. There was also an instant craving of pizza, but because I was stuck eating soft foods, I had chocolate-vanilla layered pudding.

In fact, most of what I ate the first week post-surgery was chocolate-vanilla layered pudding, strawberry jello, and instant mashed potatoes (I don’t want to look at another packet of instant mashed potatoes for a very long time). Fortunately, we got to a point where I could mash cornbread with broth and liquids from soups, which eased the massive craving of normal food. There was also a large assortment of popsicles, and the coolness helped with the pain and heat of consistently laying under the covers.

No matter what I ate, I was incredibly hungry the week post-surgery.

No matter how much I ate, I was incredibly nauseous, which I was not prepared for. They gave me ibuprofen and oxycodone to help with the pain, and this journey has showed me my stomach HATES oxycodone.

With the nausea, I also had an intense, raging headache for most of the five days I took off after the surgery. Like, there were several moments where I was brought to tears because the pain was so bad, worse than the pain of where my teeth once were. It felt like my post-car accident concussion came back; it was incredibly brutal.

It took a while to heal after my surgery. The immediate numbness took an entire day to go away as opposed to the two hours the preparer lady said. It was almost a month before I could open my mouth ninety percent without feeling pain.

All in all, I can say I wasn’t a coward and got my very impacted wisdom teeth cut out. My first real surgery… that I remember consenting to. The swelling that was happening to the roof of my mouth before I got this surgery no longer exists. Honestly, this is probably something I will forget happened, which is part of the reason I’m embarrassing myself and sharing this (I’m taking “crying over Spongebob being a month older than me” to my grave).

To anyone who’s scared to take the leap of getting your wisdom teeth out, do it. There’s nothing to be scared of, especially if you heed the warning video instead of ignoring it.

Of course, I only recommend getting your teeth out if they’re impacted. If you’re a lucky soul with wisdom teeth that came in straight, I kind of wish I were you; it’d keep me from owing a healthcare company almost $400. 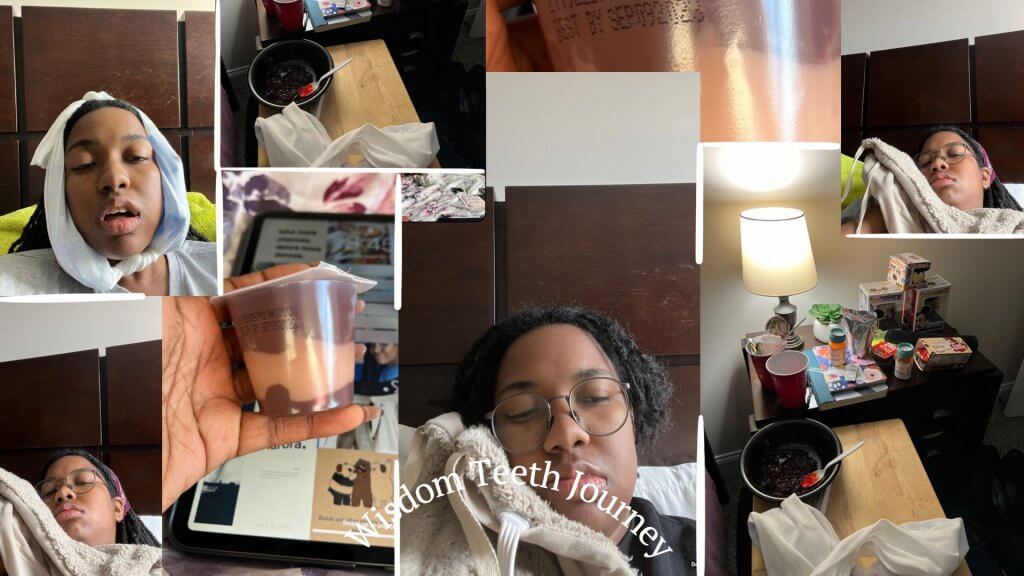 PrevPreviousA Solo Self-Care Cincy Road Trip
NextAlbum of the Year: How to Let Go by SigridNext