Where is the Media Attention?

As per usual, I am late to participating in the discussion.

As many have said, the Met Gala was a major disappointment. Yes, there were several outfits with great meaning, but with a theme as broad and unusual as “In America: A Lexicon of Fashion,” many managed to miss the mark. Some took the theme to mean American independence, but it was apparently supposed to be all about celebrating fashion made in America/American fashion (according to Vogue & Glamour). Still, some of the looks were incredibly disappointing and didn’t make sense with the theme… at least, upon first glance provided by the media:

However, there were a few stand outs that needed more recognition:

Speaking of the media, as someone who didn’t watch the Met Gala live, I relied on news and media outlets for ALL of the looks. Boy, was I kept in the dark.

Misled media attention focused on the big names, like the Kardashians, Billie Eilish, Naomi  Osaka (who did not fail because she focused on paying homage to her Haitian and Japanese cultures). Instead, the media should have focused on people who represented the theme, who understood the assignment, like A$AP Rocky.

This brings me to Jeremy Pope, the true winner of the Met Gala and representing the theme for Black people.

He is wearing the uniform of slaves. What some thought was a train was actually an oversized cotton broadcloth picking sack. The entire outfit, including his boutonniere, was made of cotton. On Instagram, James Flemons, the designer of the picking sack Pope wore, wrote, “Cotton, the fabric of our lives, came forward. Cotton is entrenched in the pain of slavery and the commodity of Black bodies. What better platform than the beauty of a Black male body draped in cotton to bridge the narrative from pain to glory?” [courtesy of Sadiaa]. Keenan “HIGz” Higgins from NewsOne writes, “… a Black man being able to dress freely in 2021 as a way to bring their struggle to the forefront of fashion’s elite is more powerful than words can say.”

About his look, Jeremy Pope writes on Instagram, “They planted seeds of beauty,/ tended to fields with unspeakable strength,/ & harvested a kind of excellence that would outlive them for centuries. So that we could one day stand up, stretch toward the sun, & tell their story.”

Where was this in the media? A coworker told me about Jeremy Pope only a couple of days, and he had to find it on Facebook. How is everyone going to say “Black Lives Matter” and refuse to give Jeremy’s outfit the attention and energy it truly deserved? This just further exemplifies the fact that everyone who was “supporting” Black people last year were only temporary supporters because it was trending. Shall we bring up the lack of Black designers at  the Gala, after a year of promising to “support the Black community?” Shall we bring up the fact that people only know George Floyd’s name and not the countless others who lost (and continue to lose) their lives because we’re stuck in a world that doesn’t like our skin color? Shall we bring up what’s happening at the U.S. border with Haitians who simply want freedom, a better life?

When it comes to the Met Gala, Jeremy Pope understood the assignment and is the only one with an A+.

I’m waiting and praying the rest of the world truly wakes up. 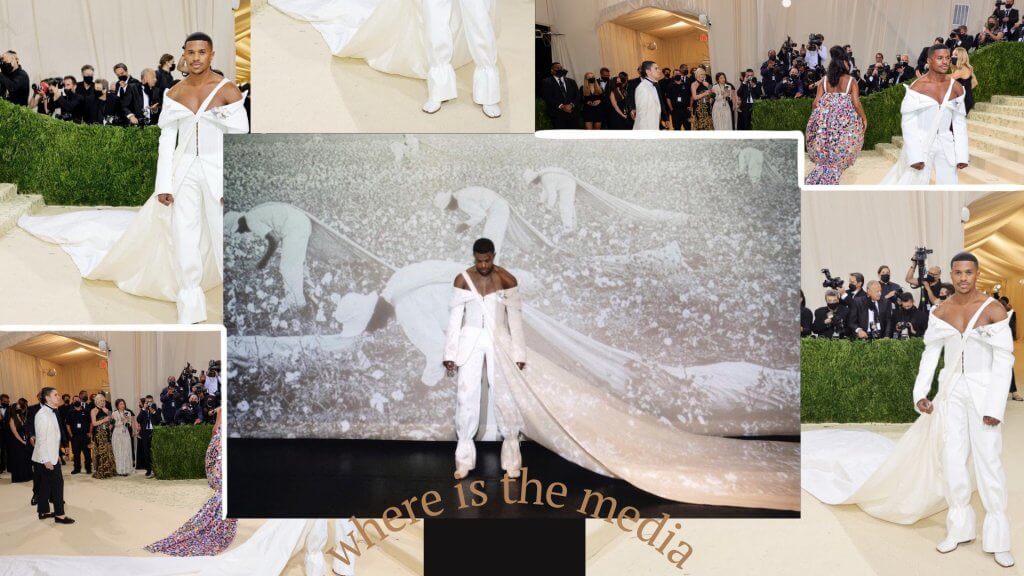